The offshore resource at Nome, Alaska has been researched by the government and many private companies over the years, and is estimated to be 1,000,000 to 4,000,000 ounces depending on how the information is extrapolated from the drilled area. There have been many studies published and perhaps the most scientific is the one done by the University of Alaska called ‘GIS application in mineral resource analysis – A case study of offshore marine placer gold at Nome, Alaska’; It can be found at this link: GIS Study. This near shore surf zone has highly concentrated areas created by the action of the ocean. Twisted Pick equipment is specifically designed to mine within ¼ mile of the beach. Over the approximately 14 shoreline miles of leased tracts, this represents about 10% of the recently auctioned tracts that our ROV mining and sampling equipment can access. By extrapolating the study data, this translates to between roughly 100,000 and 400,000 ounces of gold. 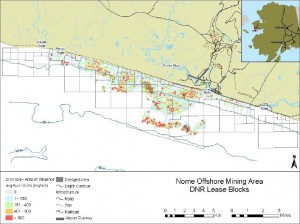 Drill results from 3,500 drill samples have been studied by geology companies like Alaska Earth Sciences (AES). AES is a leading geology company in Alaska with members on our board of advisors. AES has collected one of the most extensive libraries on historical drill results around Nome. In their professional opinion, the area surrounding Nome is a “world class” gold deposit. Public data from the BIMA dredge offshore mining operations in the late 1980’s also proves that the gold is offshore as well. The BIMA was the largest offshore operation ever conducted in the Nome area. Present day miners are also successfully recovering gold from offshore operations. 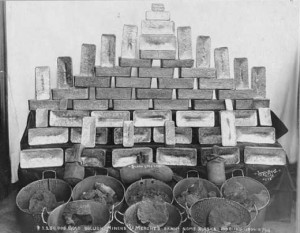 The area is a proven resource: