Securing open borders at the waterline

Autonomous underwater vehicles (AUVs) are a cost-effective platform to scan the bottom of arriving ships at the entrance of ports.

High-resolution sonar can detect unknown objects like bombs or smuggling containers attached to the vessel bottom.

Benefits of an AUV platform 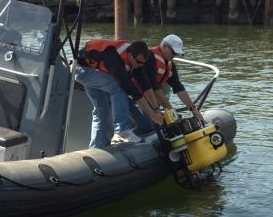 One company, Bluefin Robotics, a leader in the design and manufacturing of Autonomous Underwater Vehicles (AUVs), is being awarded a $30 million contract modification to exercise option III for the Explosive Ordnance Disposal Hull Unmanned Underwater Vehicle Localization Systems (HULS) production systems. The HULS production systems support Naval Forces in conducting hull, piers and pilings searches. This unit would be called in to inspect individual threats

Battelle is working on their Harbor Shield project using stationary sensor arrays to inspect cargo hull exteriors for explosives and other contraband in vessel traffic lanes. While presumably effective, the more permanent cables would be more expensive and unable to relocate quickly to different strategic positions. Both of these examples validate the need and interest for new technology.